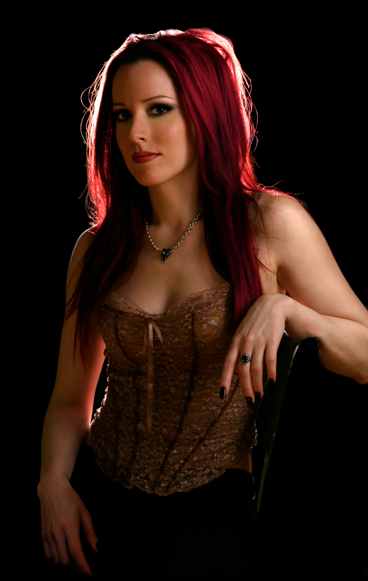 She is one of the forerunners of a burgeoning new art movement, figurative surrealism, and as her recognition as a leading female contemporary master painter grew, it opened doors to celebrated galleries in Seattle, Los Angeles, New York City and London.

Lori Earley confides that the figures she paints reflect herself but that they are self portraits which differ according to her mood.

These oil paintings are « a combination of classical realism with an element of personal distortion This distortion comes from my innate desire to transform my emotions into tangible media that express what I feel, not what I see. » A concrete example? One day when she was at school, she was asked to paint a still life from a boring display of bottles on a table. She imagined that they had all melted and painted them the way she envisioned them in her head.

Most of her portraits are 24 x 30cm which take her one month to create. Other canvases as big as 55 x 73cm have taken 6 months to finish. What are the steps involved in a canvas? First a sketch to figure out the best composition. I then have to chose a model that I think will best fit the mood of the painting, find a costume for her and figure out the lighting for the photo shoot to set the mood/atmosphere of the painting.

What about her models? A lot of them are friends and others are models that make great subjects for her style of painting. She then holds a photo shoot for reference (which she shoots herself) from which she builds the composition. She then makes a final line-drawing from the photo, transfers that drawing onto the board and does about 5 to 6 under-paintings, building up the paint from dark to light.  Her elaborate frames are also almost all hand-painted with colour accents to match each painting.

The picture she likes the most? ‘The Wish’ where a young, topless woman surrounded by a carpet of dandelions (1000 in total) is holding a little lamb…alas this painting isn’t for sale as it took too long to paint she jokes. She also likes “Drained” – such a mysterious and virginal figure immersed within a cold and rocky landscape. Why don’t you discover for yourself the last of her favourites “Miss V’ on her website: http://www.loriearley.com

When the young painter was pushed for the names of artists who influenced her work she quotes W Waterhouse, John Singer Sargent, William Bougeureau, Steven Assael (for their painting techniques), Ray Casear, Floria Sigismondi, and Chris Cunningham (for their subject matter), and David Lynch. Others include fashion designers such as Jean Paul Gaultier, Jennifer Nicholson and Alexander McQueen.

Lori Earley invites us to look into the eyes of these women of whom she is the creator.
They are the key, where the emotion is palpable. Behind their enigmatic expressions and their regal inaccessibility, we start to form a story. We wish they would come alive so we could hear their laughter or tears and listen to their innermost secrets.

Painting is a therapy adds Lori Earley.  And when one sufficiently studies her canvasses and grants them the attention that they deserve, one feels all the emotional investment of the artist that underlies them.  The canvases speak to those who understand them. The ladies therein are so attractive that one would like to drag them out of the canvas as one suspects they hold many secrets. Their power? To maintain their charm like an indelible tattoo, to never cease being beautiful or perhaps their adversity?

Every portrait moves people with its modesty, even when a breast is exposed, purity remains, stoic: these women are unattainable goddesses, capable of making our head spin with unrequited love… Ethereal and deeply moving, they embody femininity in its purest form. One could say, whilst admiring them “you have never been so beautiful as now” but they are tragic as their eyes shine just a little too brightly. The emotion that hits the viewer in the stomach isn’t momentary, it gnaws away at you – a heady mix of sastonishment and admiration at these sirens who are neither completely real nor completely imaginary.

Behind these moving portraits marked with a de-stabilising sensitivity, is a young woman who, since childhood, has had an instinctive need to express herself with a brush.

Take the time to look at these faces, to observe the fragility but yet the power they emit. The young muse lying on the blanket is called Audrey, totally bathed in pink. Her look has a silent melancholy as discreet as that of her rustling petticoat. Encircled in a corset of fine embroidery, her languid and glamourous pose on a silk bed invites you to join her. Nevertheless the sensitive observer will notice her delicate hand placed as a safety barrier, a tacit mistrust.
Audrey, the delicate muse did us the honour of taking pride of place at the 2012 BSCNEWS dinner. We thank her creator who allowed us to share in this graphical brilliance.

With Lori Earley, every face comes with a dreamlike world, every picture has its color reminiscences, its touching enthusiasm, its secrets straight from the brush. …

We wish her all the best for 2012; her face of an angel, her skilful fairy like fingers, deserving divine support and the prospect of many serene hours where she will be free to shower her canvases with pictorial fantasies, freeing her emotions and sprinkling them with such elegance; a delicate and mysterious alchemy that only the best wizards can conjure up from their palettes…